Building a combat robot can be fun for individuals, teams, and even your whole family! Get your teammates or children involved with the design choices and maybe even give them a chance to drive and compete! Remember to sign up on our home page if you want information on building or watching.

To quote Martin Luther: "What does this mean?"

Plastic Ants - These are 1lb robots made of specific types of plastic (PLA, ABS, PET, PETG). Most are 3D printed, but can be fabricated by hand. If you don't have a 3D printer, the Madison Library has one you can use for free or you can pay-to-print from various places like Rocket City 3D. Spore Huntsville has other 3D printing education and resources as well.
Open Ants - Any material can be used in the 'open' weight classes, it just has to weigh 1lb or less.


Open Beetles - This is an 'open' class with a weight limit of 3lbs.

Which size will you build?? For more details - Check out "How to Compete".

Once you have a weight class in mind, the next question is: How would you like to destroy other robots??

When it comes to choosing a weapon - be creative! You can make anything from full body spinners to horizontal or vertical spinners to drum spinners and egg beaters. Some people have made lifters, pinchers, and flippers. We've even seen plastic forks as weapons. Every bot has their strengths; every bot has their weaknesses. What will you build?? See our current team robots below. And check out our videos to see entertaining sample fights! 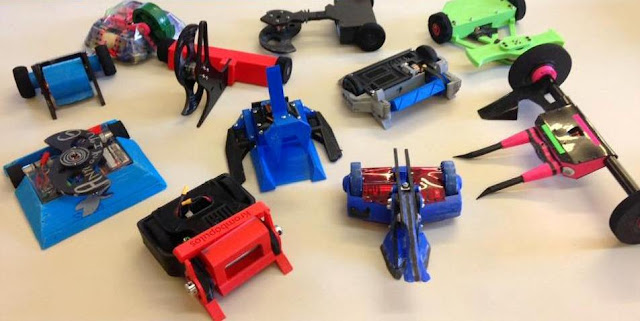 Meet some of our Team Angry Rooster Robots!


Doominator is a horizontal spinner which has seen many iterations. New weaknesses were discovered every time but the latest iteration has proven to be a strong one. (See our videos to see Dominator kick other bots out of an enclosed arena!) It has a T-shaped body and 2 wheels. Doominator has a S-shaped spinner, with sharp edges at each end. Doominator loves to kick robots high in the air!

Lich King is a robot with a horizontal spinner at the front with all of the electronics packaged in the back. Lich king is a tough bot made out of laser cut ABS and 3D printed ABS and is held together by screws. Lich King's purpose is to hit hard and destroy robots from the side.

Rain When I Die is (was?) a drum spinner. A drum spinner has a spinning barrel-shaped weapon with a notch in it. You can see the blue part above...that's about 1/5 of the drum that was originally there. Rain has 2 wheels with an electronics cavity in the back and loves to give other robots the boot. Rain may be rebuilt but for now it's sitting in several pieces after being can-opened by a super aggressive robot.

Annoying on Porpoise is a wedge with a horizontal spinner. Her purpose (porpoise?) is to get underneath robots and force them up into her spinner. All electronics are stored in a cavity below the spinner and covered in a thin sheet of plastic. She survived several tournaments but it's obviously time for some repairs. Her body is 3D printed plastic and her weapon is laser cut.